KEXP + Starbucks + STG bring you Little Big Show, a concert series that gives big love to Seattle arts organizations. Several times a year, we find a great band or two, give them the stage at the Neptune and donate 100% of ticket sales to a local non-profit. To date, we have raised over $300,000 – proving out to be the little show with a big effect. 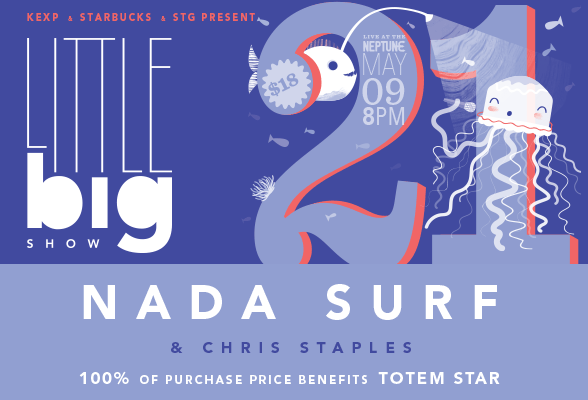 Little Big Show #21 featured artist Nada Surf, with support from Chris Staples. 100% of ticket sales from this sold out show were donated to Totem Star which amplifies and empowers youth voice through music production and performance to strengthen life skills in leadership, civic engagement, and community building. 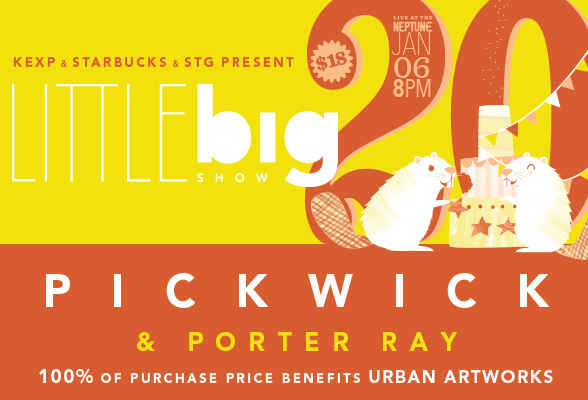 Little Big Show 20 featured artist Pickwick, with support from Porter Ray. 100% of ticket sales from this sold out show were donated to Urban ArtWorks which creates public art that empowers young people and transforms communities. 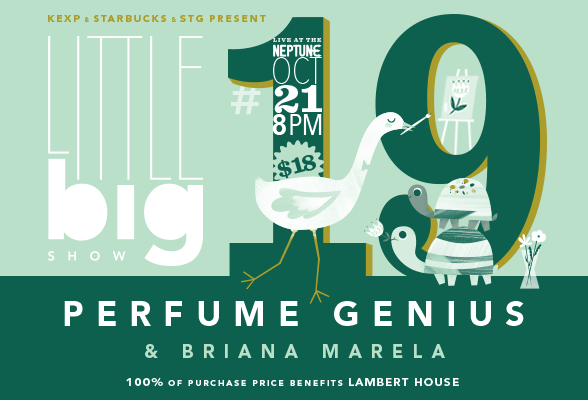 Little Big Show 19 featured artist Perfume Genius, with support from Briana Marela. 100% of ticket sales from this sold out show were donated to Lambert House which is a center for lesbian, gay, bisexual, transgender, and questioning youth, between the ages of 11 and 22, that empowers youth through the development of leadership, social, and life skills.
Read more about the show here. 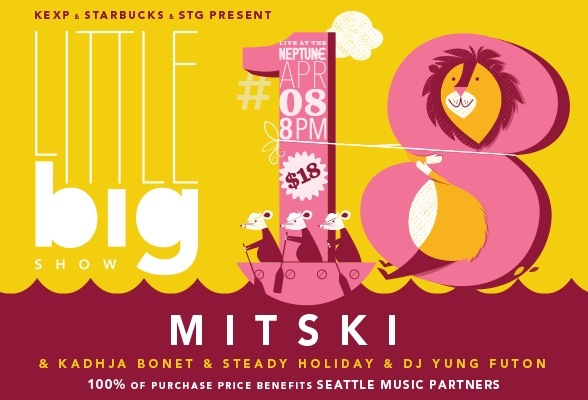 Little Big Show 18 featured artist Mitski, with support from Kadhja Bonet and Steady Holiday. 100% of ticket sales from this sold out show were donated to Seattle Music Partners which empowers and inspires underserved youth to learn to play an instrument, and become part of a vibrant music-making community.

Angel Olsen, plus special guests Chris Cohen and Sloucher put on a great show at the Neptune Theatre on February 8th. 100% of ticket sales were donated and provided $18,000 to NFFTY who enables, nurtures, promotes and encourages the next generation of filmmakers to inspire, lead and entertain the world with their stories.

Lapsley, with guests Aquilo and local band, Navvi, put on a great show at The Neptune Theatre on November 13th. 100% of ticket sales were donated and provided $9,800 to Youth in Focus to help them continue putting cameras in the hands of at-risk youth, teaching them how to develop negatives into positives. 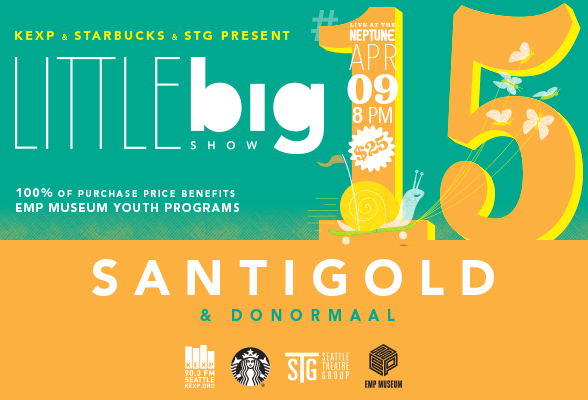 The show’s headliner was Santigold with support from Kilo Kish and local Seattle artist, DoNormaal. 100% of the ticket sales went to benefit EMP Museum Youth Programs like Sound Off!, which supports the all-ages music scene in Seattle by giving young artists a rare opportunity to showcase original music, launch their music careers and connect with the larger artistic community. With #15 being sold out, over $23,000 went to the EMP Museum Youth Programs. Neon Indians, Aqueduct and Explorer Tapes put on a great show at the Neptune in September, raising over $11,000 to support NW Tap Connection, a group that inspires and nurtures young people while simultaneously training some of the region’s top dancers.

Cloud Nothings, Tacocat and Chastity Belt rocked the Neptune to support this month’s beneficiary, Teen Tix. $11,025 was raised from ticket sales which will go towards empowering young people to take an active role in shaping their arts community. Teen Tix offers $5 arts tickets to young people and provides leadership programs to teens interested in pursuing careers in arts journalism or arts management. 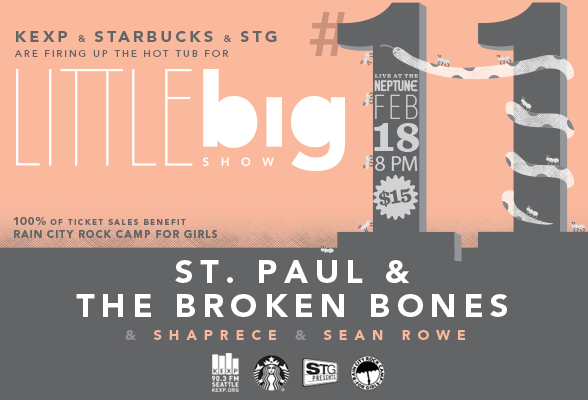 St. Paul and Broken Bones played to another sold out crowd at Little Big Show #11. The show raised over $14,000 for Rain City Rock Camp for Girls, that builds positive self-esteem and encourages soul-stirring expression for local girls through music. Thanks for helping our local girls to keep on rocking! 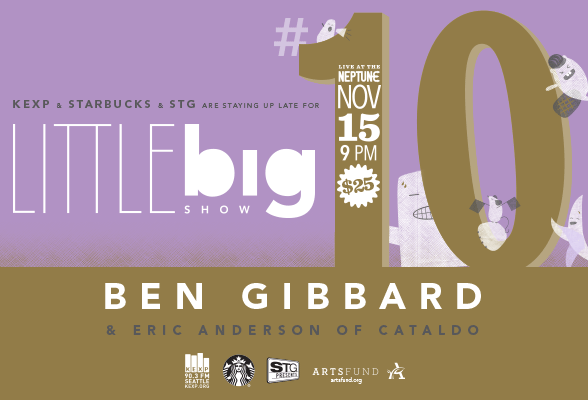 Little Big Show #10 raised a ground-breaking $25,000 for ArtsFund, thanks to the strong following of Ben Gibbard and show opener, Eric Anderson. Tickets sold out in a flash and the lucky show-goers were privy to a paired-down set and intimate performances by both artists. The fundraising doesn’t stop with the show, as the dollars will be applied to matching funds at www.power2give.org/PugetSound Check out the various projects online and participate in this unique crowd funding approach for supporting local arts. 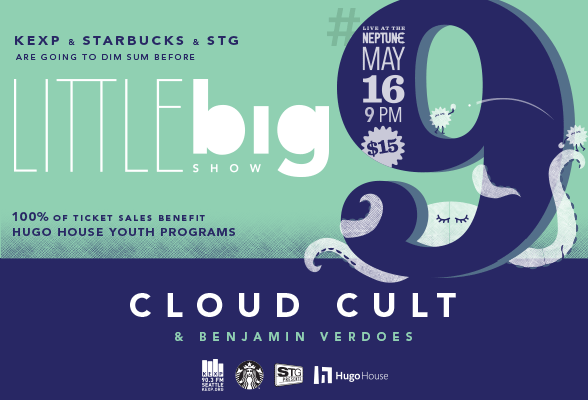 Cloud Cult played to a packed house at Little Big Show #9 along with local favorite, Benjamin Verdoes. $12,810 was raised from ticket sales to support the youth programs at Hugo House, giving young writers the chance to explore, consume and create great writing. 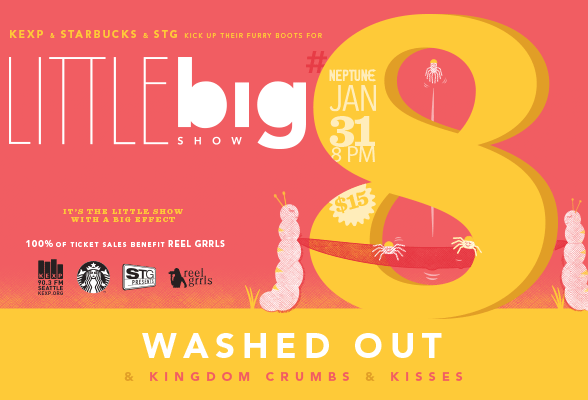 Washed Out rocked a sold out Little Big Show #8, along with Seattle-based Kingdom Crumbs and special guest, Kisses. $14,540 was raised for Reel Grrls, a non-profit focused on mentoring local girls through state-of-the-art training to create transformative media and grow confident, savvy young women. 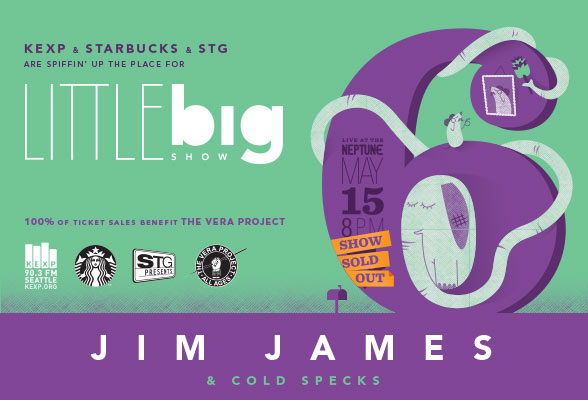 Little Big Show #6 sold out before we could even get the word out! Performances by Jim James and Cold Specks will enable us to give $14,000 to The Vera Project, an all-ages volunteer fueled music and arts venue with a focus on young people ages 14-24. 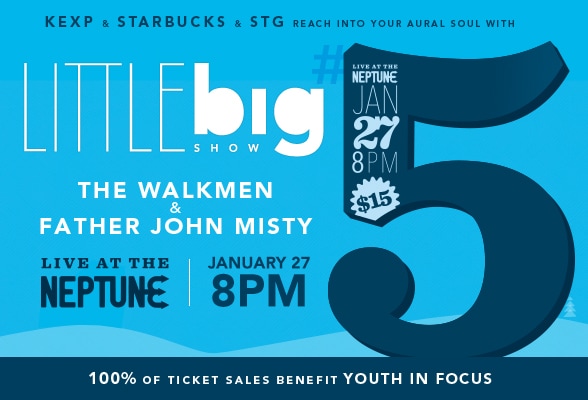 The Walkmen and Father John Misty played to a sold out crowd at Little Big Show #5, and beneficiary Youth In Focus took home over $14,000. The talent of several student photographers was on display as they shot from all angles to capture the vibe of the night.  Pro-photogs Jim Bennett and Dan Poss mentored the students on site and helped inspire greatness. 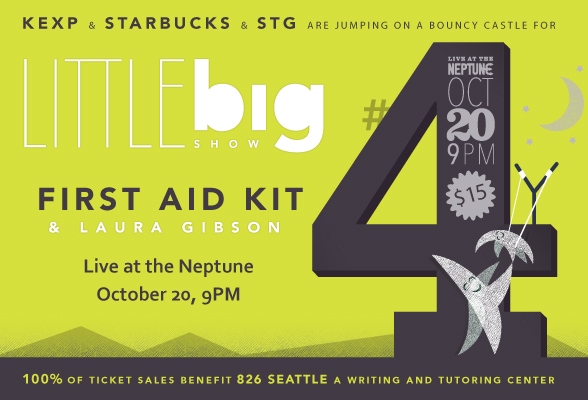 Little Big Show #4 raised over $13,000 for 826 Seattle, a dynamic writing and tutoring center with some of the most creative young minds around. Along with an amazing show, our fourth Little Big Show featured the first ever Flash Fiction Experiment, where show attendees tweeted a 6-word autobiography. A few favs:
@826seattle Found love. Found Seattle. Found happiness #lbs4
@826seattle A mom, but not dead yet #lbs4
@826seattle Ate Oreos. Now I eat kale. #lbs4 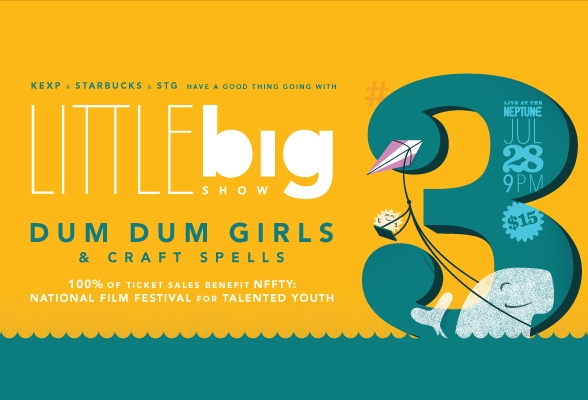 The third time was indeed a charm! On July 28 at the Neptune Theatre, the Dum Dum Girls and Craft Spells put on a great show and helped to raise over $5,000 for NFFTY: National Film Festival for Talented Youth – the largest youth film festival in the world based here in our hometown. 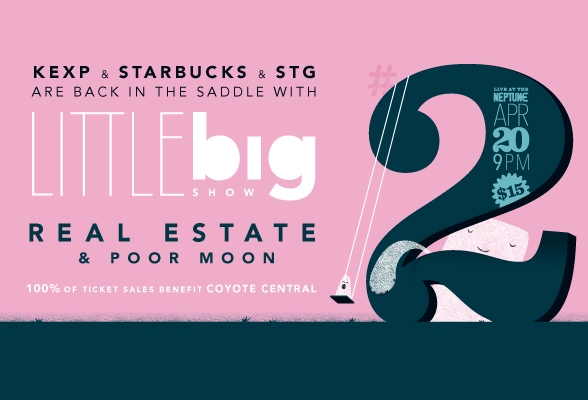 The second Little Big Show took place on April 20 at The Neptune Theatre. Thanks to a great turn out, and dynamic performances by Real Estate and Poor Moon, over $10,000 was raised for Coyote Central to further their efforts in supporting young Seattle artists. 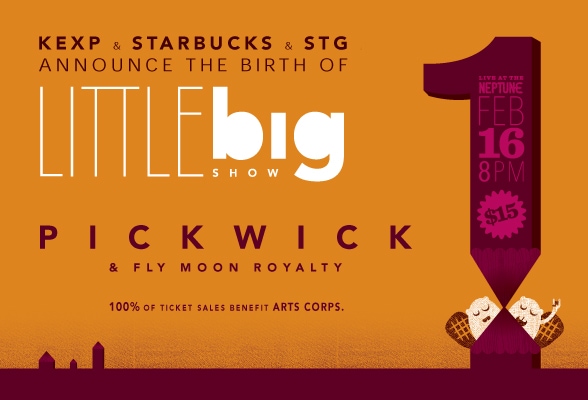 Our inaugural Little Big Show was beyond expectation. With a sold out show at The Neptune and stellar sets by Seattle’s own Pickwick, with Fly Moon Royalty opening, over $14,000 was raised for Arts Corps – founded on the belief that all young people, not just those with resources, deserve access to quality arts learning opportunities. There’s no doubt this first show paved the way for a great concert series to grow well into the future.